Tuscans, on the whole, love nature especially if it is comestible and the countryside around Bolgheri is like a giant larder. Olives and grapes are made into wine and oil, while during the hunting season the woods and fields reverberate to the sound of gunshot as doves and wild boar and hare are culled for the pot. In Spring, the people scrutinizing the hedgerows or the roots of trees are on a mission: for wild asparagus or porcini mushrooms. Meanwhile, nearly everybody in Bolgheri has an orto or vegetable garden either behind the house or in rented plots elsewhere. Even in the suburban gardens of Donoratico, the occasional vine or burgeoning tomato can be spied beneath the magnolia trees. And in theory a family with a fair-sized vegetable garden, chickens in the yard and hutches of rabbits need only go to the supermarket for soap. What is not consumed in season is bottled for the winter such as artichoke hearts, aubergines and runner beans, while tomatoes are pureed into sauce and stored for innumerable pasta dishes. The mushrooms are also bottled in oil as well as the wild asparagus while at the end of the summer the left-over basil is made into pesto and deep frozen. Peaches are peeled and bottled whole in syrup to bring back memories of summer at Christmastime, while blackberries and figs are made into jam for the crostate, the jam tarts that are a staple of home made Tuscan desserts. There are several stands selling home produce on the country roads around Bolgheri, such as Di Vaira half way on the old road between Bolgheri and Donoratico a family well known for their olive oil and wine. In Bolgheri itself, Romina has a tiny store crammed with jams and bottled preserves in the Chiassetto delle Rime Nuove.

Pitigliano is a breathtaking ancient hill top town near the hot springs of Saturnia perched on the edge of a towering outcrop of tuffaceous rock. It was also a leading centre of Jewish life and culture since the 1500’s and by the mid nineteenth century there were almost 400 Jews living within its walls. Today you can visit the Little Gerusalem where the subterranean kosher slaughterhouse, the ritual baths and the bakery for the matzo and azyme bread are preserved in the Jewish museum. Until 1931 there was a Jewish university here. The perfectly proportioned little synagogue, restored to its original splendour in 1995, looks out over the valley towards Gerusalem, and people come from as far away as Tel Aviv to be married here in what could hardly be a more magical setting. On the whole, the Jews of Pitigliano were completely assimilated into the life of the little town, intermarrying and following the same professions as their Christian neighbours with whom they would pray together for rain during a drought. During fascist times, they were sheltered in caves and grottoes in the tuffaceous rock by the rest of the population and very few were rounded up to be sent to concentration camps. Nonetheless, as so many have left over the years to find work and fortune in bigger cities like Livorno or Florence, today there is only one member of the Jewish community left. Mrs Elena Servi is there to greet visitors to the museum and to lend them the key to the lovely Jewish cemetery descending down the hillside in tiers where three hundred Jews are buried and where, uncharacteristically for Jewish cemeteries, there is the occasional stone angel and an enchanting stone figure of a little girl.

La Locanda di Villa Toscana is a charming B&B situated at number forty one of the grandly named via Vittorio Emanuele which is in fact a narrow medieval street leading uphill to the heart of the village of Bibbona. The owner, Marechita, is an interior decorator – hers is the Villa Toscana store next to the castle in Bolgheri – and the rooms are all embued with a Cotes du Sud sophisticated country chic, ideal for a romantic Tuscan weekend. View online at www.lalocandadivillatoscana.it 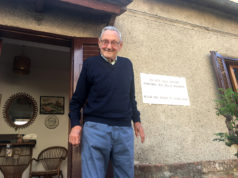 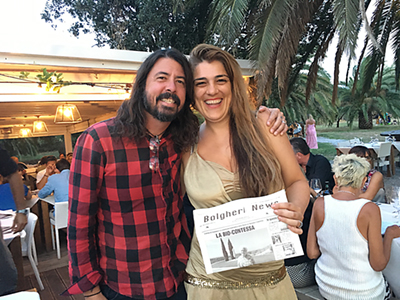 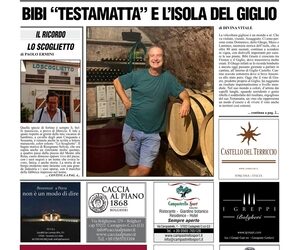